Some sales managers love to teach and train. If they could spend all their time lecturing and facilitating workshops, they’d be in seventh heaven. Needless to say, their boss wouldn’t be quite as happy.

Other sales managers hate that training part. They love to strategize, to sell, to mentor, and to problem-solve. They love every part of the job except creating training materials and delivering them. When they ignore that part of their job, both their people and their performance suffer. They’d be smart to outsource the sales training.

But outsourcing b2b sales training isn’t the entire solution—unless the manager’s purpose is simply to “check off that training box” and be able to say his people “are trained.” The sales manager who purchases a sales training program still has an essential role to play, without which the training investment is unlikely to yield the returns everyone is looking for.

Here are five things you as sales manager must do to create Training ROI:

1. Complete the training yourself.

END_OF_DOCUMENT_TOKEN_TO_BE_REPLACED Some people have heard me tell this story, but I know most of you haven’t.  When I set out, 31 years ago (almost to the day) to start a sales consulting business, I intended to travel light. That was my euphemism for being a sole practitioner, an expert who would and could be fully accountable to his clients because he, and only he, would be serving them.  I’d have my grip solidly on the quality-control knob because I’d be the only employee of my sales consulting firm.

When I semi-retired in 2008 and passed control and leadership of the business along to the next “generation,” it was clear I had failed in my mission to travel light.  We were 32 employees strong (and today, we have 42 people!), and the success we built over that quarter-century was largely due, not to me, but to those other 31.  Consider that my Lesson #1.

END_OF_DOCUMENT_TOKEN_TO_BE_REPLACED Larry’s wit and your warmth worked perfectly over dinner. His incisive questions, his cogent observations, and his spot-on stories held the prospect rapt from the appetizer through the dessert. And this wasn’t some trick Larry played. He wasn’t just performing. Larry was giving them a genuine sample of his talent and his professionalism: how he thinks, how he relates, how he problem-solves in a very focused, collaborative, and sophisticated way.

Larry delivered substantial value that evening—leaving the prospect with expert analysis, probable diagnoses of tough challenges, and possible solutions. If the client had picked up the tab for dinner, it would have been an investment with a return already delivered. But of course, they didn’t! Larry picked up the tab, because this was basically a pitch.

A pitch that worked! Larry learned less than four days later that he won the business.

Life After the Pitch: Now What?

Now the heavy lifting would begin. He knew, about halfway through dinner, that this client was seeking blended learning for their sales staff. Training workshops and business development clinics (Larry’s specialty) would be part of the solution, but they expected online learning modules as well. Larry had known throughout his first three years in sales consulting that one day he would need to develop an online learning component to his offerings, but he was able to put off the project because no client had yet insisted. His business was growing nicely—he had even taken on two professional associates—and the lack of an online offering was not a problem until now.

END_OF_DOCUMENT_TOKEN_TO_BE_REPLACED I bet you tell the salespeople you train to spend more time in front of clients and prospects.

When you discover there are organizational obstacles that get in the way of that, you do what any good consultant would do: You go straight to management and tell them how costly it is when they keep their salespeople away from selling.

The same notion applies to you: consultants should consult. Yes, that’s a blinding flash of the obvious. You know it. But have you jumped out of your skin for a while to watch yourself in action? Have you observed how you actually spend your time? Have you listed all the things you do that aren’t actual consulting or training activities with the client in real time?

Here are a few of the activities that we’ve seen become expensive, even destructive, time-sinks for consultants:

END_OF_DOCUMENT_TOKEN_TO_BE_REPLACED

Consulting and training ideas for our partners to save time, increase revenue, and offer better service to their B2B Sales clients. 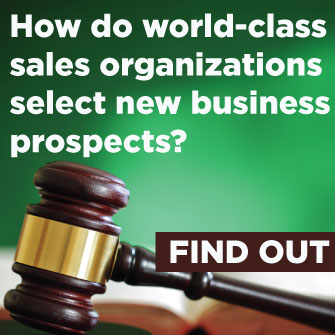