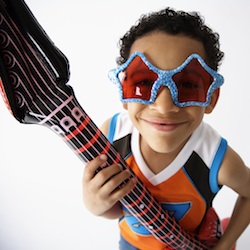 MTV, the station that gave us the VJ in the 80s, recently named their first TJ, or Twitter Jockey. Prior to August, Gabi Gregg was not famous; she was discovered through a contest MTV hosted to select the first TJ. And, in recent weeks, she has gained quite an online following (23,966 followers on Twitter).

Twenty nine years after its launch, MTV continues to be relevant, connecting with music lovers in the digital space as well as in traditional media. The great news is—when selling digital advertising, you can adapt this approach to expand your sponsorship and endorsement opportunities.

Let’s say your radio station’s Saturday night club spot is contracted for the next year, but you have several clients interested in this type of opportunity. One solution might be to create your own celebrities, such as a “Party Patrol,” who use live (or recorded) video, Facebook status updates and Twitter to cover the entertainment scene each weekend.

Or, if your newspaper wanted to go head-to-head with the competitor that does a lot of celebrity endorsements, you could use your blog or Facebook space to create your own niche experts—a domestic goddess ala Martha Stewart who could endorse a variety of home improvement products; a gadget guy who tests the latest computer and home electronics equipment; or a pet lover, a gardener or a fitness enthusiast who discuss their passions. (There is that expectation that news sources are impartial, so care must be taken to be transparent.)

Each of these could be an endorsed or sponsored digital sales opportunity—and you can easily find willing participants among your own employee base or by holding a contest, which could also be sponsored.

Video did not kill the radio star, as that first MTV video predicted—and digital won’t either. In the digital era, you are no longer bound to the time, space—or even talent—requirements of traditional media. You have the flexibility to create an integrated media solution that fits your client’s needs.

As you explore this new territory, it’s possible you could unleash the next digital star.

For more ideas on how you can put social media to use in your ad sales organization, download Social Media for Media Sales Pros.