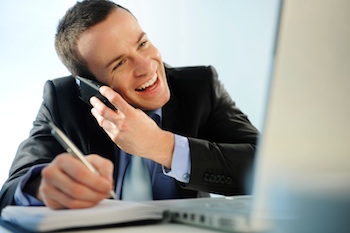 Nobody really likes to fail! But the reality is, every salesperson has experienced some kind of failure at some point in their career… it’s inevitable! The great ones consider these experiences equivalent to an Ivy League education. Instead of allowing the negativity to devour them, they learn, overcome and move forward—quickly!

My True Story: In August of 1996, I made my very first cold call. I was extremely prepared. I had a list of what I considered to be 20 really strong questions. I knew exactly who I needed to talk to. I was confident in my company’s value proposition, and I was certain my prospect would be excited to talk to me and learn how my company could help his company!

I counted to ten, picked up the phone and called my prospect. To my surprise… he answered! I introduced myself, my company and told him why I was calling. He didn’t exude the excitement I anticipated… but, he didn’t hang up on me either. I considered this a positive and pressed on.

I took out my list of questions and began to read them directly off my prep sheet. He quickly became noticeably irritated, interrupted me and said “I don’t have time to play 20 questions!  Next time you call me, you better do your homework and know my business!” YIKES… mission failed!

So now what? As I put the phone down, the world around me completely disappeared. I realized I had two choices. I could crawl under my desk and let the tears roll down my cheeks, OR I could burst into laughter and move forward. I certainly had big emotions, and they needed to come out. It was deciding exactly how to release my emotions that made the difference.

As a sales consultant, I’ve worked with many sales people who’ve had similar “mission failed” experiences. And top performing sales people always respond the same way: they move forward! Here’s how they do it:

Nietzsche said, “What does not kill us makes us stronger." He was a great German philosopher in the 1800’s. Born in 1844, his words are still powerful and quoted regularly today. In fact, American Idol Kelly Clarkson decided to sing about it. Her single “What Doesn’t Kill You” from her album appropriately titled Stronger quickly rose to number one after its debut earlier this year. So... those of you who like pop music can sing along to the lyrics as you’re moving forward after a “mission failed” sales experience.

At The Center For Sales Strategy we teach our clients a “Don’t Give Up” approach to sales, and we encourage them to utilize our 7 Step HOW Selling Sales Process. Both offer sales people a sequential method to effectively approach and work through the sales process. Both also offer a strong platform to identify specific areas that can be strengthened to increase sales performance. This certainly makes it easier to learn, overcome and quickly move forward after a “mission failed” sales experience.

Do you have a "mission failed" sales experience to share? How did you overcome and move forward?

Demrie Henry is a Performance Consultant at The Center for Sales Strategy.