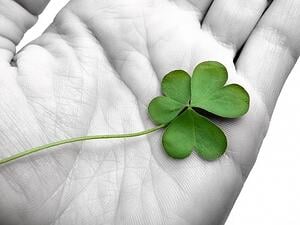 As the global celebration of St. Patrick’s Day approached, I started to think about how lucky we are as a society to be able to put aside our differences and come together in celebration for one day. It’s ironic that I first thought of the word lucky to describe this phenomenon, as the phrase luck of the Irish is so common, and even more so around St. Patrick’s Day.

Luck of the Irish?

Luck of the Irish is commonly thought to mean “extreme good fortune.” However, according to Edward T. O’Donnell, an Associate Professor of History at Holy Cross College and author of 1001 Things Everyone Should Know About Irish American History, the term did not originate in Ireland. It actually originated here in the United States! Turns out it’s a mining term.

"During the gold and silver rush years in the second half of the 19th century, a number of the most famous and successful miners were of Irish and Irish American birth… Over time this association of the Irish with mining fortunes led to the expression 'luck of the Irish.' Of course, it carried with it a certain tone of derision, as if to say, only by sheer luck, as opposed to brains, could these fools succeed." (Source: Mental Floss)

In one fell swoop, those who invented the phrase luck of the Irish both demeaned the Irish and lent undue credit to luck!  If the Irish were so darn lucky as a people, they wouldn’t have suffered extraordinary famine just years before in their homeland.  If luck were so important a factor in success, our history would not be replete with stories of what men and women, throughout history, have accomplished by skill, hard work, practice, creativity, and determination.

Pluck of the Irish!

Had they credited the pluck of the Irish, they’d probably have been a lot closer! Pluck is defined by Google as spirited and determined courage. Synonyms include backbone, daring, spirit, intrepidity, fearlessness, mettle, grit, and determination. That sounds like what it takes to be successful in 19th century gold and silver mining, doesn’t it?  Success is more about determination than about sheer luck. That’s why I’ve always been partial to this definition of luck: When preparation meets opportunity. In other words, we make most of our own good luck by preparing ourselves.

Preparation is critical for success. So much so that it’s safe to say there has never been a professional athlete who doesn’t practice nearly every day, a doctor who doesn’t stay current on the latest therapies, or a musician who doesn’t rehearse or do sound checks before major performances. Successful salespeople are no different. Consistently high-performing salespeople spend a large majority of their time preparing for success throughout the entire sales process, from approaching to closing to serving. In order to secure the first meeting, they must prepare a strong valid business reason. They must prepare for their needs analysis, and they must continue to prepare as they collaborate with the prospect and develop solutions. More pluck than luck.

That does not mean having a bit of luck on your side is not appreciated… or that it occasionally plays a role in success. Of course, it does. That’s why we all know the phrase “timing is everything.” But we can’t rely on luck any more than the Irish ever could.

Have you subscribed to our blog yet?