Sales Performance Metrics: Teams That Keep Track of the Score Are More Successful

As a parent of two small children, I've coached my share of soccer teams over the years. I like to think that my teams learned something from my coaching and leadership, but I am starting to think that I learned more from them.

Many of the lessons I have learned can be applied to sales and specifically sales management: the team that keeps score does best, practice like you intend to play, and you are only as strong as your weakest player.

Teams That Keep Track of the Score Are More Successful

One of the league rules with 5-year-olds is that we don't have referees and don't keep score. While this might be great (I think it's debatable, but that's another blog) for teaching kids about trying hard, giving it their best, and not worrying about the outcome, this is not reality and shouldn't be part of managing a team of salespeople.

For the kids, the effect of not keeping score was that they didn't play as hard and didn't seem to care too much when the other team scored. So even though we weren't keeping score officially, I started keeping score on my clipboard. And the kids started asking after every goal if we were winning or losing. Even without a scoreboard or referee to keep score, it's human nature( even at an early age) to want to win and to know the score. I can certainly say that when I would tell the girls that they were losing by one point or that it was tied in the fourth period, they would hustle and end up scoring a goal just to win in a league that we didn't officially keep score in.

Great salespeople are no different—they are typically motivated by the score. Some of the things they keep score of are how much they have sold compared to their peers, how close they are to their monthly goals, and how much money they stand to earn by closing the next deal. Take the scoreboard away from salespeople and they lose motivation and their numbers go down. As a sales manager, letting your team know the score through the use of sales performance metrics and sales dashboards can help to improve the overall organization's performance, simply by knowing what the score is. Sales performance metrics or sales dashboards should measure the most important metrics to the organization and keep track of the sales pipeline as well as lead generation counts and close ratios.

Besides seeing that our players played harder when the score was being kept, it was also very clear that when we were able to have good practices we performed better in games. Sales coaching and sales training can help your sales team improve in practice so that when they are in front of prospects they'll perform at a higher level.

You Are Only As Strong as Your Weakest Player

We had a pretty strong soccer team and most of the time went into the last quarter with a lead. However we had a group of three girls that we had to remember to not put together on the field at the same time. Every time we made that mistake the girls would talk and pick daisies, and that led to a loss each time.

As an Advanced Financial Analyst at EDS in the mid 90's, I can remember sitting down with the Strategic Business Unit (SBU) President that I supported to discuss his 10% list for the coming year. I can't recall the official term for the 10% list but the list represented the bottom 10% of sales performers that were to be replaced in the upcoming year. Because of the transparency of sales and quotas it was easy for each salesperson to gauge their personal sales performance metrics and know if they needed to close a few more sales to stay out of the bottom 10%.

Each year, these low-performing salespeople would be shown the door, and most would be replaced by the first of the year with new talent. This might seem as though it's callous and heartless, but if you can improve your sales team each year and usw personal sales performance metrics to do so, your overall sales performance is sure to increase.

One last lesson the girls taught me and it applies equally well to sales...  Each one had a natural preference for either playing offense or defense, and we played best when they were able to go with their natural tendencies. Salespeople with a talent for sales are a great find. Regardless of their style, let them use their talent for sales to sell using their that unique style. 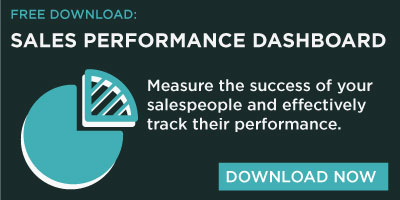