Are Your Prospects Dying of Boredom? If every time your prospect or customer felt like you were pushing your products, rather than focusing on his business, he transformed into a Hollywood film director and screamed, “Cut. Boring! You’re out of here!” He’d be doing you a favor. What happens more often is that the prospect is bored and finds a semi-polite reason to show you the door. He’s just polite enough that you don’t get the bigger message—that you were boring.

A recent interaction with my boys made me step back and evaluate my approach to working with them. And then I started thinking about how salespeople often take the same approach when working with their prospects.

It was a typical evening. My family and I were all sitting around the dinner table. As usual we were talking about our day, sharing stories about our highs and lows. Because we have three boys, ages eleven, ten, and four, my husband and I often use the dinner table as a training ground (sometimes a battlefield) to work on their manners. After all, good manners (whether at the table or anywhere) will be of high value to them today and throughout their lifetime.

That fact is unquestionable and irrefutable, yet it’s not always simple to convey. That evening, I was telling my boys how poorly they acted during a recent trip to the grocery store.

I started into the familiar adult rhetoric about “what my mother used to tell me,” thinking it might resonate with them. After about two minutes into the conversation, my ten-year-old (he’s the funny one) interrupted me, sounding like that Hollywood film director, saying, “Cut. Boring! Let’s talk about superheroes!”

He stopped me dead in my tracks!

Why is it so hard for parents (please tell me I’m not alone) to get children to be interested in learning about manners?

Your Sales Prospects are Asking the Same Question

Why is it so hard for salespeople to get their prospects interested in their incredible products and services? After all, these products and services will greatly benefit their business. Why aren’t they interested in something that will provide tremendous value? My guess is that the salesperson isn’t speaking the prospect’s language, isn’t seeing the world through the prospect’s eyes, and is just boring the prospect instead of holding his attention.

When looking deeper into the scenario with my boys, I realized my approach was severely flawed. I told my boys they acted inappropriately and needed to learn simply how to direct their energy into positive behavior next time we go to the store. I told them how frustrated I was when we were checking out, how I’m not looking forward to going back to the store with them, and they just need to act better.

I was making a demand for change based solely on my needs.

I did not consider my audience, nor did I attempt to modify my approach… I just expected them to understand and relate to my view of things, just because I’m their mother. I never once spoke about how changing their behavior would greatly benefit them and support the things they value, even at their tender ages. I was unintentionally self-centered in my approach. And I got called out on it (boring!).

Looking back, I remember all three of them, eyes glazed over, staring at me with, a look halfway between confusion and derision. The words I thought were so eloquent probably sounded to them more like blah, blah, blah. I’m sure that’s when my ten-year-old had enough and tried to redirect the conversation (boring!).

This got me thinking about how often I might be doing the same thing with significant prospects—boring them with an unintentionally self-centered approach. I know better, of course. So do you. But do we always remember to carry on a conversation that’s on the prospect’s “mental turf,” instead of our own? When we see the world through our prospect’s eyes, when we speak the prospect’s language (figuratively as well as literally), we discuss solutions instead of features and benefits, which is never boring.

I thank my ten-year-old for having the gumption to say “Cut. Boring!” I’m going to remember that day very often in the future when I’m interacting with prospects in any way, and I have the opportunity to not be boring. 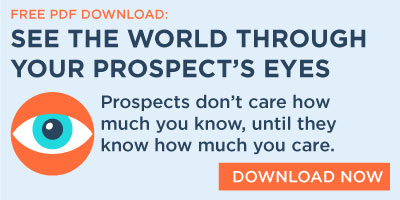