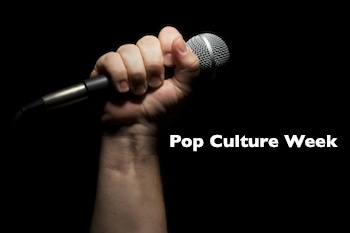 It's Pop Culture Week on The Center for Sales Strategy Blog. Each day this week, we're taking our sales strategy lessons from the pages of pop culture. Today, we're talking celebrities...

“99% of the time, a woman will be treated exactly the way she wants to be.” This is a direct quote from my mother, and something that I think I heard nearly every day when I was growing up. In typical childlike fashion, I would usually roll my eyes (in a direction my mom couldn’t see) and walk away. I didn’t put a lot of stock in her “motherly advice.” After all, I was 15… and just like every other 15 year old, I pretty much knew all I needed to know.

Fast forward 22 years later, I am here to tell you I think my mother hit the nail on the head! I didn’t really understand what she was talking about back then; it seemed a little esoteric. Today, I know exactly what she meant, and it might just be the best advice she’s ever given me. Simply stated, she wanted me to know that we have the power to control how other people see us, think about us and treat us. And we can accomplish this by the way that we talk (or don’t talk), the words that we choose to articulate our thoughts and feelings, the clothes we choose to wear, and going even deeper the kind of friend we choose to be. Qualities like loyalty, honesty, genuine concern, integrity and kindness really matter, and they make a lasting impression on your personal and professional brand. In sales, your professional brand is critical! How your clients see you and know you often depicts the strength of your relationship.

Following are 5 celebrities that exemplify professional branding, so much so that I can write about them without even knowing them.

Lady Gaga – Rarely is she seen in “regular” clothes looking like a normal everyday person… and that is on purpose. Every time she steps out in public, she completely transforms her look. She has created a persona that is bold, daring, cutting edge, and fearless… and she is consistent. As a child she was regularly bullied, and she was told she “would never make it.” That ruthlessness fueled her desire to prove them wrong and do it in a big way… even if that means wearing a dress made of 100% pure beef. Her heart (and her music) belongs to everyone who was ever been made to feel inferior because they were “different.” Today she is the Queen of Different; she regularly uses her star wattage for youth empowerment and has most recently launched an Anti-Bulling Foundation with Oprah. Consequently, she is a force to be reckoned with, and has more followers on Twitter than any other person on the planet.

Tom Hanks – I think he might be known as the nicest guy in Hollywood. I’ve seen countless interviews with actors who’ve had the opportunity to work with him and they consistently remark about his character, his kindness, his professionalism, his leadership and oh yeah… what a great husband he is. I mention that only because in Hollywood, lasting relationships aren’t typical off the screen. Tom Hanks really seems like the “guy next door.” He is approachable, genuine and remarkably humble given his monumental success. He’s never flashy, flamboyant or arrogant; he’s the opposite. In a recent interview, his son even went so far as to call him “nerdy”… so it seems he’s also very relatable. He ranks as highest all time box office star with over $3.639 billion total box office gross, an average of $107 million per film… proving that nice guys don’t finish last!

Simon Cowell – Blunt, critical, arrogant and often abrasive are words that one might use to describe Simon Cowell. Like the aforementioned, his success is monumental… just ask him. He has earned hundreds of millions by just speaking his mind. His autobiography, appropriately titled, “I Don’t Mean to be Rude, but…” gives reason to why he epitomizes the phrase...“tell it like it is.”  While he is regarded as harsh by many, he is also highly respected by those in his industry. When Simon speaks, you know what you’re going to get… his honest, not so humble opinion. He is consistent and unapologetic, and that’s exactly how we like him! Today, he is considered to be among the most successful A&R executives, television producers, entrepreneurs and television personalities in the world.

Duchess of Cambridge, Catherine (Kate) Middleton – She was born a commoner and has transcended into royalty, quite literally. Kate doesn’t talk much about herself publicly; most everything we know about her is from other people’s recounts of her… and that is actually quite telling. Her personality, her style and her life has been written about in almost every major newspaper and magazine across the world. She is consistently touted for her grace, genuine dignity and unwavering loyalty. She is the girl we all want to be friends with and the girl who the Royals are proud to call their own. And while she far surpasses anything “average,” she has made it abundantly clear that it’s important for her to maintain some level of “average lifestyle” despite her Royal status. Her full title and style is Her Royal Highness Princess William, Duchess of Cambridge, Countess of Strathearn, Baroness Carrickfergus. Try saying that 10 times fast.

Mark Cuban – Self-made billionaire and proud, or I should say VERY proud, owner of the 2011 NBA Champions, The Dallas Mavericks. Known as an independent-minded person, it’s ironic and quite appropriate that this team be named The Mavericks. Merriman-Webster defines maverick as “an independent individual who does not go along with the group or party.” That is also an incredible depiction of Mark. He is probably the most controversial owner in NBA history; he is outspoken, fearless and is not afraid to put his money where his mouth is. In fact, he has paid millions of dollars in NBA fines (more than anyone else) for mouthing off to officials during games… and he’s okay with that! He’s passionate about what he believes in, he’s a tough competitor and will fight to win. And he’s consistent. I don’t know Mark, but living in Dallas, I know lots of people who do. One thing everyone consistently says about him… love him or hate him, “Mark does it Mark’s way.” Given his success, I think Mark’s way very well could be the right way.

Each person above exemplifies professional branding, and they have become “known” for what they do, how they portray themselves, what they believe in and how they interact with other people. How did they create their brand? That’s a great question. If you read back through each profile mentioned above you will notice one key word… “consistent.” As with all marketing, consistency is vital to build and maintain a brand. Whether it be the Coca-Cola brand, the Mark Cuban brand or your professional brand.

Demrie Henry is a Performance Consultant at The Center for Sales Strategy.

To see all the posts from Pop Culture Week, follow these links:

Five movies that teach us about talent development