RUDY, RUDY, RUDY…. A Story about Passion and Persistence 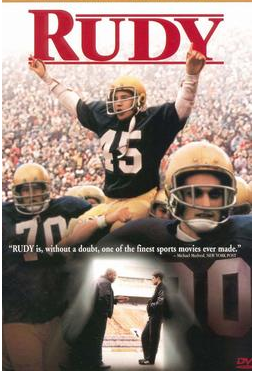 Over the weekend I saw "Rudy," one of the most inspiring movies in sports. For those of you that have not seen Rudy, it’s all about a person’s passion and persistence to accomplish a dream.

All of his life, people have told Rudy he’s not good enough, not smart enough, not big enough.  But nothing stopped his passion for playing football at the University of Notre Dame.

From the time he was a young boy, Rudy was determined to join the Fighting Irish. But his blue-collar family laughed at his ambitions, and they knew Rudy would follow his father and brothers to the local steel mill. For four long years after high school, he did just that. However, he didn’t give up, as Rudy went through heroic, and occasionally hilarious, lengths to win admission to Notre Dame. Once there, he became a walk-on player, serving as little more than a human tackling dummy against starting players. Bloodied, but unbeaten, Rudy won the respect of legendary coach Ara Parseghian and the other Irish players, giving him a shot at gridiron glory.

"Rudy" is an unforgettable testament to the power of dreams, passion, persistence and never giving up.

Rudy realized “real-time” how important a plan is when he arrived in the middle of the night on the South Bend campus. He realized that to play football at Notre Dame, first he had to be accepted as a student. To be accepted as a student, he had to attain a better GPA. This required him to attend two years at Holy Cross, a junior college and spend close to two years on the Notre Dame practice squad before being allowed to dress for the varsity. Over those four years, his passion, preparation and persistence helped him to succeed—and most importantly—to not give up after one or two attempts.

Many individuals in sales have this same passion and persistence, but don’t have a plan. Thus, when it takes longer to close a sale, they just give up.

If you have a passion for sales, planning and persistence are essential in approaching a prospect. When you know you have an ideal prospect, don’t give up after one or two attempts.  Personalize a plan, Don’t Give Up and you will Stand Out!

Learn more about our "Don't Give Up" strategy for getting that first appointment:

Jeff Roth is the Client Engagement Director at The Center for Sales Strategy.