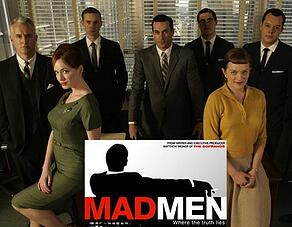 Mad Men Season 6 debuts this Sunday on AMC and over the past several seasons the show has done a great job of showing a society in change and how the advertising world has evolved to adjust to these shifts in society’s norms.

Past Mad Men episodes have touched on societal issues such as the impacts of the Vietnam War, the drug culture of the 60's, and the growing freedom of women in the 60’s. These societal issues are usually the backdrop for why marketers watch the show – the history and evolution of the advertising agency and marketing in general.

If Mad Men were set in 2013 there is no doubt that some of the issues that would be featured on the show regarding the evolution of media and advertising agencies would include:

Future episodes of Mad Men, if they were set in 2013, might include creating branded content for clients to put on YouTube, interactive campaigns that include micro sites, or the use of digital out-of-home electronic billboards with texting as the call to action.

While the success of the show is no doubt linked to the nostalgic portrayal of the lifestyle and advertising agency culture of the 60’s, it’s also important to look at the success as partially stemming from something in each of us that sees ourselves as the true Mad Man of today. Anyone involved in today's media landscape sees that changes are taking place and the major shifts, driven primarily by digital and social media, are underway at agencies and within marketing.

We all want to be part of this transformation and evolution but only the most creative and best marketers know how to cut through the clutter of today’s media landscape and connect with consumers.

Today's Mad Men in 2013 have many more options available to them as technology and the choices of media and mediums have expanded from the limited selection that the Mad Men of the 60’s had at their fingertips. Now, we can truly be madmen creating integrated campaigns that exist online, in print, on television, and even in augmented reality. It's truly a blank canvas for marketers today to put their mark on what historians and possibly TV producers will write about 2013, fifty years from now.

The challenge for current madmen, like yourself, is to figure out how to cut through the clutter of all of the different media that consumers are bombarded with every day. There are so many different ways to reach consumers in 2013 that it takes a very well-thought-out and researched marketing plan to reach them.

This is possibly why market research has grown so much since the 1950’s and 60’s. There are so many more complicated issues and challenges with reaching today's consumer that we've never encountered in the past which is the greatest challenge we, as marketers, face today. So get your martinis ready (and DVRs or iTunes season subscription) for another great season of Mad Men. Hopefully it will give you some ideas on how to be innovative and break through the clutter in order to reach your prospects yourself.

Post your comments below on what you see as the biggest challenges today’s Mad Men have to deal with? Or simply post what you are looking forward to most in Season 6 of Mad Men.

Interested in learning more about the rapidly changing advertising landscape and how inbound marketing efforts can generate leads and help you stand out amongst the clutter? Attend our next Inbound Marketing Forum!