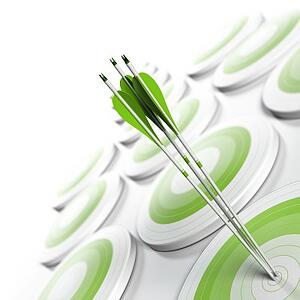 We run a division of our company called the Appointment Lab, where our team takes ideal prospects that our clients identify and we do the hard work to set appointments with those accounts. Anyone in sales knows this is one of the toughest parts of the sales process—if not the toughest.

Recently, we stopped to study the process we followed with 350 prospects. We looked at 100 of those prospects where we were successful in setting that first appointment for one of our clients. What we learned was interesting enough that we wanted to share it here.

With these 100 prospects, it took several attempts initially to even make the first contact. Only 20% of the time were we able to secure the appointment based on that first contact. So, one contact is clearly not enough. If we secured the appointment with 20 of the 100 on the first successful contact, you might be wondering how many contacts did it take with the others?

It took more than one contact with all of the other 80 prospects. Some appointments were secured with the second contact, some with the third, more on the fourth, etc. One of our key discoveries is that in 97% of the cases, the appointment was booked after 4 contacts (some after one, some after two, etc.) So, based on this sample (which is a pretty large sample), you can see that you need several attempts to make that first contact and somewhere from 2-4 contacts to secure your first appointment.

This analysis reinforces what we keep hearing from sales managers—that getting that first appointment is one of the most difficult and time consuming parts of the sales process.

This process that we often refer to as "Don't Give Up" is one of the keys to developing important new customers, but it's only one piece.

Here's the 4 step process we suggest to a quality business development approach:

Step 2:  Compare to your Ideal Customer Profile and narrow down to the best prospects to go after.

Step 3:  Determine the primary decision maker and other key decision influencers and decide who you are going to try to get an appointment with first.

Step 4:  Don't Give Up—make several attempts and up to four contacts as you seek to secure your first appointment.

If you want to know more about what we are doing in the Appointment Lab, click here.