How Do You Coach Salespeople Who Are Not as Competitive as You Are? 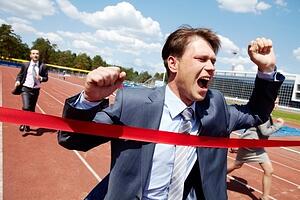 I recently attended my son’s fourth grade championship basketball game. They had a great season and fought hard, but they just couldn’t pull it out.

Losing the fourth grade championship game is disappointing for sure, but what I found most interesting were the different levels of disappointment from the players. Some were okay with it. They had a good season and enjoyed their time on the team, so losing was no big deal. They walked happily over to the snack area just like they did after every other game. Others were a little more ruffled. They were more visibly disappointed and somber, hanging their heads a bit and walking a little more slowly to the snack area.

Then you have kids like my son, who was devastated. I could see tears in his eyes and his distress was palpable. He talked incessantly about the game for three full days. He analyzed every play, every move, and he asked himself what could have happened differently. He sulked and stewed right up until soccer practice started and the new season of challenges began.

My son is competitive. That might be an understatement. More accurately, my son has been competing and measuring everything since birth. He doesn’t play for fun, he plays to win. That doesn’t mean he doesn’t have fun along the way, it just means he’s always keeping score—even if no one else is.

He expects this same level of desire and commitment from everyone around him. It is very hard on him when his teammates are not as competitive. In his mind they are not trying hard enough. It is also hard for his noncompetitive teammates to understand his passion. In their minds he is way too intense.

Does this resonate with you? Are you a competitive person? Is everything a competition for you—complete with a score and a big W or a big L? When you’re alone at the gym, do you look around you and see who to race on the treadmill? Is that person clueless that they are in a contest?

If you have a salesperson who is competitive like my son is, it’s pretty easy to keep that person motivated: Just give them the opportunity to win!

But how do you coach salespeople on your team who are not wired this way?

What about the people who don’t keep score? They’re the ones who simply play for fun. Maybe they go to the gym purely because they love how they feel afterward. Rather than keeping score of how many sales they have made, they’re driven by the relationships they’ve formed with people and the results they’re helping achieve. They work to feel good and to make a difference. To them, keeping score seems petty and demotivating. They want to succeed, but success is about doing their best consistently, not about beating a teammate or winning an award.

How do you let your desire to compete drive the person and the organization, without disconnecting with the person you are managing?

Start by learning about the people you manage. Ask specific questions about their motivation to determine what gets them excited and what their goals look like. Use this information to craft an individualized management plan and coaching strategy based on their hot buttons, not yours.

Strength-based management is not about fixing people. Nor is it about getting them to see things your way by making them compete. It’s about figuring out how they are inspired to produce more or better, then determining how to tap into their motivation. It is about using their strengths to work around their weakness.

Competitive drive is only one aspect of a person – consider what else you have to work with:

Remind yourself from time to time that you are the coach, not a player. You never see the coach run on the court in the middle of a game, grab the ball, and execute the play (even if the desire to do so is there!). Instead, the best coaches maximize the strengths of each team member by knowing what they do well, by knowing what drives them, and by putting them in the right scenarios to maximize their strengths.