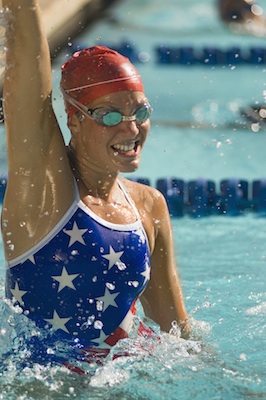 Every fourth summer, a great many of us spend much more time watching TV than we did the previous three summers. It’s the Olympics, of course, and our eyes are drawn to the tube by the incredible athletic talent on display. But do we realize just how important, how determinative, that talent is?

Those who’ll grab the gold in London this summer didn’t just train harder. They had a built-in advantage—call it an unfair advantage, if you like—that was highlighted Friday in a feature article by the Wall Street Journal’s Matthew Futterman.

Futterman is on the scene, interviewing coaches and longtime observers, and he cites example after example to underscore the point: Training has become a commodity; everyone has access to it. Champions still need a coach, but now more than ever, the coach needs a natural champion.

“There are few secrets in sports anymore,” Futterman says. “A great athlete from nearly any country other than North Korea or Cuba can find the resources to excel… with high-level training so ubiquitous, God-given talent and physical advantages become the great differentiators.”

"Nature—being born a certain way—is a prerequisite for nurture," Duke University professor Adrian Bejan told Futterman. That’s an axiom that travels way beyond the Olympics, way beyond sport. Successful nurture has always depended on nature. There are billions of people on Earth today whose nature has never benefitted from nurture; regrettably, they have never reached their potential, and we have never enjoyed the contribution they might make. But there is no one on Earth who has been trained, developed, coached, and nurtured to great success without having the basic nature, the basic talent, for the task, job, or career.

Smart sales managers know they can’t turn just anyone into a highly productive sales person. They don’t waste time or precious corporate resources (including their own coaching talent) on people who just weren’t blessed at birth with what it takes to be successful at sales. Futterman says, “The Olympic stars this summer have bodies custom-built for the sports they compete in. To borrow Lady Gaga's phrase, many of these medalists were simply ‘born this way.’”

There’s no “body” for sales, but there is a head and a heart without which sales success will remain elusive. Every great seller I’ve ever seen has been, among other things, curious, competitive, and caring. And no manager I’ve known has ever been able to make any salesperson more curious, more competitive, or more caring. Great sales people were simply “born this way.” And because they were, all the training, coaching, and development paid off… just as we’re seeing it pay off this summer for the Olympic stars.

For some tried and true methods of recruitment and selection, download:

Steve Marx is Charman Emeritus at The Center for Sales Strategy.