How to Spot a Future Leader I have been enjoying short stories from Twitter lately. The latest comes from Sean Hill, @veryshortstory.

I love this story:

Jack threw a piece of candy on the floor and watched his three children fight for it. The winner was groomed to protect Jack as he grew old.

Over the last few years, I have been helping one particular client completely transform their sales department. The change has been challenging to many in the organization. Some didn’t make it. Many of those who did make it struggled at first, and even after some time, they only embraced the change as much as necessary. But one person on the team embraced the change wholeheartedly. He was able to thrive—and even helped others on the team get on board.

When this organization “threw the candy on the floor,” this seller grabbed it. He’s now a manager in the organization. At the beginning of the process, we all spotted several people who had future leadership potential. It wasn’t clear who would emerge, but it became clear when the candy hit the floor.

If you could use some help considering who on your team has leadership potential, we have a tool that could help. It’s called the Management Suitability Survey. The survey asks you to think about those salespeople on your team now and consider who is already behaving like a leader.

The one-page form uses prompts related to leadership behaviors, such as:

The best way to use this survey is to have three or four managers fill it out independently and then compare the results. See which name bubbles up most often. 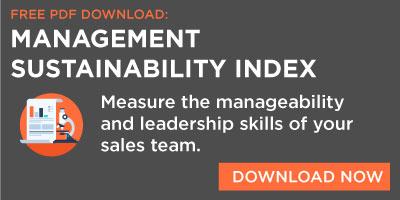