The Magic of Establishing Value

One of the best things about spending time in the field coaching my account managers is that I tend to come away with some great lessons myself! With Andrew’s permission, I’d like to share one of my takeaways from an appointment on his in-field day, and that is this:

There is something truly magical that happens when a client understands your value.

For over a year, Andrew worked with a decision maker who had major influence over the marketing for four businesses. Through careful needs analysis, brainstorming, and work with our digital team, Andrew secured substantial annual marketing dollars from all four of these businesses. In return on investment meetings, Andrew received excellent feedback from the client, who reported record-breaking sales as a result of our team’s efforts. All signs pointed to success!

And then, from out of nowhere it seemed, Andrew received an email from his client stating that they would have to scale back their spending. The roof on the business was in dire need of repair, and it was going to set them back over $200,000. Now, the owner of the business (we’ll just call him Fred) was starting to scrutinize expenses, including all that money he was dishing out for marketing.

Until this point, Andrew’s meetings had involved a decision maker (someone who could sign the checks), but not Fred, the business owner himself. Sure, Andrew had a positive relationship with him, but Fred had never participated in marketing meetings to understand the value that Andrew was providing his business. In Fred’s mind, Andrew might as well have just been a walking toilet which was continuously flushing away his money. (Pardon the analogy, Andrew!)

With big money on the line, Andrew scheduled a couple of meetings with Fred to help educate him on the solutions we were providing him. One of those happened to be on Andrew’s in field day.

The purpose of this meeting was to teach Fred the ins and outs of one of the responsive websites he purchased from us. While this website had been live for some time, Fred had never taken the opportunity to learn exactly how it worked. Our website designer led the call, and he patiently walked Fred through the features of the website. He talked about the benefits of WordPress and the e-commerce platform that he selected for the website. He pointed out all the minute details he carefully included to make sure that all of the company’s thousands of products were listed accurately. He trained Fred to make his own changes and updates to the site, all the while making sure Fred understood that he was just a quick phone call away for any additional help needed.

During this presentation, I sat quietly, watching Fred’s response. Fred started leaning in, asking questions. His face lit up when he saw all the incredible tools our web designer had provided him. And he started saying, “Wow!” At least twenty times. Seriously, I was keeping track. There was also at least one “Oh my gosh!” in there and a few “That’s amazing!” By the time we concluded the meeting, not only was Fred fascinated by what this website could do for his business, but he had a new understanding of the painstaking work that was involved in creating the final product.

So, let’s recap what happened here. Andrew faced a potentially massive revenue loss from a client who knew little about his advertising outside of what it was costing him. Then, Andrew and our web designer educated Fred on what he had purchased, how it benefited him, and empowered him to use the tool himself. Now, Andrew is no longer just a pesky sales guy asking for money; he’s a trusted partner in the business. This is what I mean when I say that there is something truly magical that happens when a client understands your value.

All of this got me thinking: are we doing enough to convey our value to clients? When we implement a great promotion, do we seize the opportunity to prepare a recap to show the client what we did? When we conduct a spot-on digital campaign, do we request a face to face meeting to show the client how it benefited him? When we produce a commercial after the deadline, do we make sure the client knows that we made an exception for her? Or do we just assume that clients already appreciate and understand what we’re providing them?

My fear is that we’re so busy moving on to the next thing that we forget to pause and take credit for our work. If we are constantly going above and beyond without communicating our work to the right person at the client level, we’re like the student who works all semester on an extra credit project and then forgets to turn it in. We miss the opportunity to convey our value, and we fail in the eyes of our client. We risk being viewed as just another expense.

What Andrew did isn’t rocket science, but it is powerful…powerful enough to move a client to say, “Wow!” when he was once saying, “Woah, what am I spending all this money on?!” When Fred started to scrutinize his ad spending, Andrew didn’t have to scramble to find free stuff he could give to appease his client, as we so often do in our industry. Instead, he communicated the value that was already there in our partnership, and now he has a highly-satisfied client.

Something magical happens when a client understands your value. But it’s up to YOU, the account manager, to be the magician.

Allison Delagrange is a General Sales Manager for Federated Media in Fort Wayne, Indiana. She’s a 2005 Taylor University graduate, coach to a team of top-notch sellers on 97.3 WMEE, mom to a little princess and twin boys, and wife to one handsome dude. Allison loves to help others succeed and share insights she’s learned over the course of her 10-year career in sales. 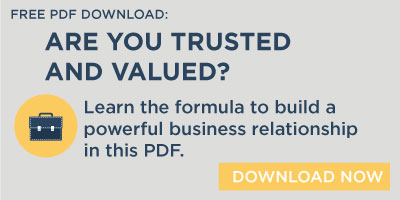