What Does Sales Performance and Triathlon Training Have in Common? 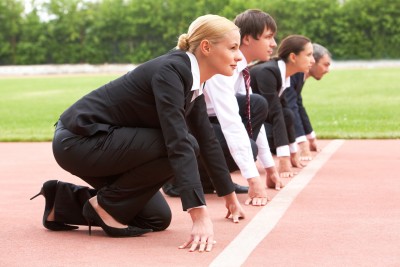 A couple of months ago, I registered to compete in a triathlon. As I began training for the three-sport event, I quickly began to notice similarities between how I was preparing for the race and sales. So what do they have in common? More than you might realize… let me share my story with you.

I’m still not sure how or why I decided that I needed to compete in a triathlon, but as soon as the thought entered my mind, I registered for a local event. I was now invested and there was no looking back. I had never competed in a triathlon before, so I began to research all of the different mobile apps available to help me train. I found one I liked, downloaded the app, and began to plot out my training schedule – seemed easy enough.

Interestingly, when I started in sales I did the same thing, except at that time I searched for resources on my computer and not on my cell phone.

I knew when I began my training that I would need the most help with running. I swam competitively when I was younger and I had rekindled my love of cycling about six months prior. Running however, I had never enjoyed. I was the kid that played several team sports, but I did everything humanly possible to avoid running laps.

At first I tried to avoid running… only doing it once or twice a week and spending more time on my swimming and cycling. While I was picking up some speed with those two sports, it was not enough to overcome the deficit created by my running. I knew that if I was going to compete, that I needed to focus on my running – after all, my goal is not to just complete the event, it is to compete in the event! Similar to how every talented, high-performing salesperson feels about their job.

All three sports require different skills. They use different muscle groups. I could spend 2 hours a day on my bike, or swim a mile every day, but neither of those activities would make me a stronger runner. The only thing that would make me a stronger, faster runner was to run. I realized that if I wanted to be good at all three, I needed to practice all three consistently.

It was this realization in my training that got me thinking. Training for a triathlon is actually very similar to any complex sales process. In order to achieve sales success, you have to train and excel in more than one area.

Just like in training for a triathlon, where you have to sharpen different skills and muscle groups, you must do the same in your sales training.

Think about it – whether you sell media, electronics, or pharmaceuticals, you need to be more than a one trick pony to compete. You need to be able to do more than simply communicate the features of your products. You have to create value, demonstrate your expertise, and develop solutions in response to their challenges. You have to continually strengthen your skills and knowledge in order to increase your sales performance. Exercise every muscle, even the ones you would like to avoid.

Remember, your goal should not be to just get by or be mediocre… it should be to compete and succeed!

Want more tips and stories on how to improve your sales performance? Tune in to the Edge Podcast and listen on the go!