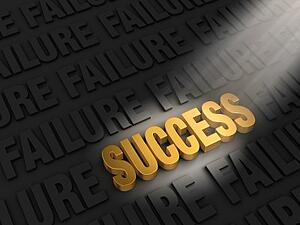 Anyone who’s ever participated in sports, coached sports, or watched sports knows the object of the game is to win! We keep score throughout the game, because when the game is over we want to know who played the best and who deserves to be crowned the winner!  Salespeople in B2B sales are pretty much the same. They keep score by evaluating their new business conversion rates, by regularly analyzing their budget vs. goal numbers, by measuring renewals, and by consistently making sure they’re meeting their customer’s goals and ROI. When all of these things are positive… they consider that a win.

Salespeople regularly find themselves at the end of a loss and must make a pivotal decision about their next step. And how they choose to react to each closed door is a strong determinant of their ability to overcome failure, learn from their mistakes, and ultimately move forward to experience success.

Getting back on the horse after a fall is a decision, just as getting back to business after a loss is a decision. And when you decide to get back up and actively be part of your own success, you will win.

Whether it be sports, litigation, school, or sales… winning requires hard work, dedication, perseverance, and the innate desire to win.

True Story:  My 8-year old son plays baseball. He’s been playing four years now and this past season his team won the Championship in his division.  He loves baseball and loves to compete, so he decided to tryout for the All-Star select team in our area. This was his first time to try out for sports. In the past, him getting on the team was just a matter of us signing him up. He was so excited about the tryout and the opportunity to play on the All-Star team.  He gave it everything he had during the tryout. After the tryout, he asked his dad and me every day, several times a day, whether or not the team roster had been announced. Unfortunately, when the team roster was determined and the new All-Star team was revealed, he was not included. When his dad and I told him he didn’t make the team, he was noticeably upset. He held back his tears with a smile (that’s his personality) and we talked through it. We talked about how great he performed during his tryout and how proud we were of him for working hard and doing his best. We also talked about how incredible the opportunity was for him and what he learned from it. By the end of our conversation he was in high spirits and he said, “dad, I have just one question… when is the next tryout?”

His response to his loss was the absolute best response he could have made. Now I have no idea how long he will play baseball, but his desire to get back on the horse is one that will propel him to success throughout his life.

If you were to ask a high performing salesperson what they do after they lose business to a competitor, or lose a client or a big contract… they will respond a lot like my 8-year old son did. They will say something to the effect of, “I get back on the horse and I look for the next opportunity!” High performing salespeople are highly competitive, they hate to lose, they keep score, they learn from their losses and when they do lose, they naturally make the decision to get back to business, work hard and look for the next opportunity.

Don't give up after one or two attempts! Download "Don't Give Up" for a detailed plan.