Don't Obsess About the Decision Maker in Sales

I just read this headline in a book I am reading:

It stopped me in my tracks.

The book is called Predictable Revenue, by Aaron Ross and Marylou Tyler. I thoroughly enjoyed the book, and would recommend it to managers. The book highlights the sales process that Salesforce.com uses.

In the book, the authors suggest you lead with questions like:

The basic point the authors make is that when you are first approaching a prospect it’s more important to understand the decision-making process than it is to get an audience with the actual decision-maker. Part of the reason this is true is that there are often many people who can influence the decision—people the decision-maker invites into the process. You want to find out who these people are and what role they play. Often you will be more effective with the decision-maker if you have first invested time with the various decision-influencers.

We have been teaching for years about the role and importance of decision-influencers (in a piece called The Decision Maker and Decision Influencers), but this book brought the concept to life in new ways for me. The point that connects to what we have taught for years is the idea that there are many decision-influencers.  While these influencers may not be able to give the big Yes the salesperson is seeking, they can and do vote No—and the decision-maker in the corner office rarely overrules them.

There are many people who can play an influencing role. We place them in three main categories:

For a copy of our summary of the Decision Maker and Decision Influencers concept, click here. 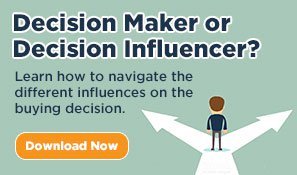