Is the Road Too Narrow or Are You Too Fat? Leadership from Twitter Arjun Basu writes (very) short stories on Twitter. He calls them “Twisters.” You should follow him at @arjunbasu. Here’s one:

The road narrowed. I said, I’m too fat for this road. My wife laughed, but I was serious. I was not happy with my weight. Or the road itself.

The road keeps changing, doesn’t it? In business, it seems as if at least half our roads are under construction or subject to detours—all at the same time. Has your road to success narrowed? Or are you just too fat to fit? Those are entirely different questions. Or should I say, those are entirely different ways of defining the problem or even of looking at the world. If you see the road as the problem, you let yourself off the hook—but you also condemn yourself to whatever the road has in store for travelers who are too fat for the new road. If you see yourself as the problem, even grudgingly (because you don’t have to love that new road to recognize it, acknowledge it, and deal with it), then success opens up for you.

Leadership Lessons from This Quote

Last week, the manager of a business unit at one of our clients mentioned to me that the corporate office had asked him if he was going to achieve his first quarter goal. Of course not, he told me and told them, proudly listing all the seemingly good reasons why he wouldn’t. Two of their largest accounts had canceled at year’s end, another had folded, and their biggest producer had decided to jump to a head-on competitor.

He thought he would garner my sympathy for how rough the pavement under his feet had become. But he didn’t. I told him the Basu twister, and that it’s okay to be angry at how the road had narrowed—but that the solution his corporate office expected, and that he himself no doubt wanted, was not to be found in anger about the road.

His sales organization—its people, its processes—may not have been too fat for the old road, but apparently it was for this new, narrower road. Not literally fat, of course, in the sense of over-staffed or lazy, but simply not fit for the new environment, the new realities.

In fact, one way his sales organization was unfit was that it was under-staffed and had long been so. I showed him how I knew this, what impact it was having, and what he could do about it. No one likes to hear they’re too fat, or that they’ve been mismanaging the place for too long, but he actually started feeling better about his situation the longer we talked. Why? Because he realized that the road was a source only of anger, but the lack of fitness was a source of action.

We went on to discuss some other ways he was too fat for the road. He knew well who his poor performers were, but hadn’t been replacing them with fitter people. His compensation system failed to reward the right behaviors, so fewer people showed those behaviors. And when he revealed that his people made very few calls on new prospects because it had become so difficult, I pointed out that this is a perfect example of how the road has gotten really narrow in recent years. It’s not even as wide as a trail in the woods these days, and his entire structure was too darn fat. We discussed applying the division-of-labor to approaching new prospects.

This manager had wrapped his head totally around Basu’s statement, I was not happy with my weight. Or the road itself. He understood the difference between anger and action. 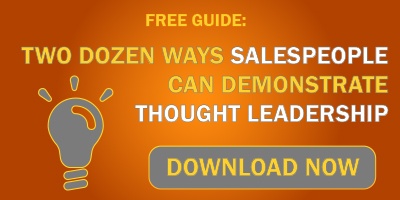