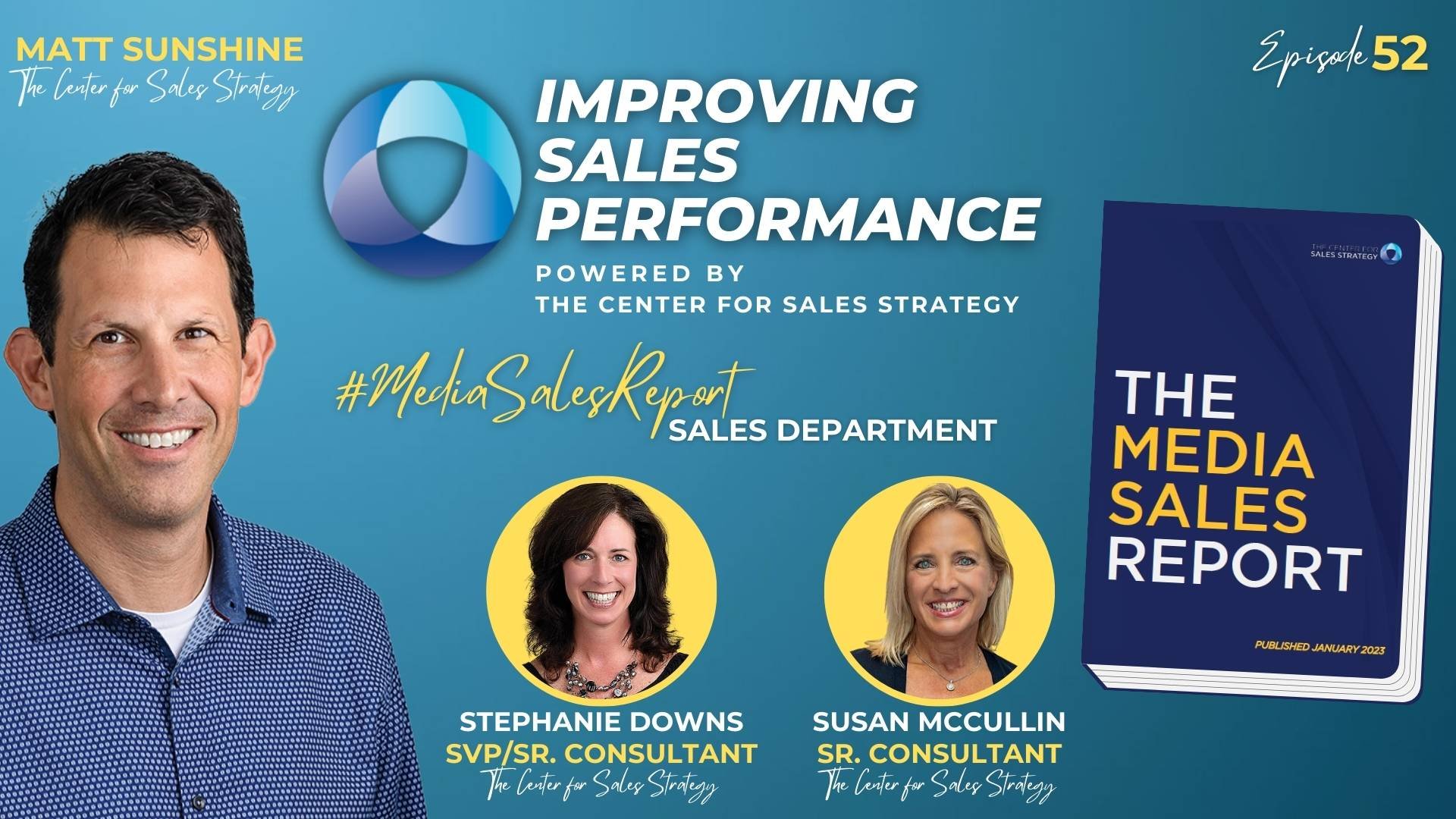 This season on Improving Sales Performance, we’re analyzing the findings from our latest Media Sales Report. With data collected from surveys conducted in Q4 of last year, the responses from sales managers and salespeople alike will help us chart a solid path forward through the media sales landscape.

In each episode, Matt is joined by a rolling roster of outstanding experts from our team here at The Center for Sales Strategy.

Together, Stephanie and Susan give their insightful takes on some top questions that arise from the report, like:

When Matt presents this huge takeaway from the Media Sales Report, Susan jumps in with an astute observation.

“I think in the past, a lot of media managers have hired from their competitors; they've hired from other markets,” she says. “And I think that's changing because, as the teams have gotten smaller, I think loyalty is even stronger in some cases to where they already are [currently employed]. We need to look at other places.”

And in terms of how Susan would go about easing the difficulty of recruitment? She offers the following.

“And then you're getting people that, you know, even though you may not personally know them, they're a referral... And then they're using the talent assessments that they have and making sure that the people have the right talents. And that helps really set them up for SA success and really broadens their recruitment net.”

Stephanie approaches the recruitment stat from a slightly different perspective.

She says, “I mean, it's real. We don't want to make light of that, but it makes me think, ‘What are sales leaders doing with their current team to keep them? What are they doing from a retention standpoint?’”

“So, it's a little bit of a twist on how to get better at recruiting or...what are they doing to make sure their team is an engaged group of people and that they're retaining their talent? How are they growing and developing them? And if they're not being very intentional about doing that, then they need to be because the recruiting issue is a real issue. It's tough!”

For organizations struggling with recruitment, Stephanie has this advice: “It doesn't have to fall on just the sales leader's shoulders. They should get other people in other departments and other people on the team and have a group that helps support the whole recruiting strategy.”

The Size of Sales Teams is Shrinking

“30% of sales managers are leading teams of one to five people,” Matt says. “Last year, 18% of managers said that they had teams between one and five people. Are you guys seeing that firsthand?”

And why is this phenomenon occurring? Stephanie has a few theories. All of which aren’t so dour.

“A few things come to mind on this. One, economic uncertainty...I think some organizations are putting hiring pauses; maybe there are hard freezes, maybe it's just a pause in hiring, or maybe a sense of ‘we'll hire only if we absolutely have to.’ So, I think some of what’s driving it.”

“The difficulties in recruiting for sure. We've already been talking about that. But I do think it's also that some organizations are getting better at thinking about the structure of the organization.”

“I think they are thinking more about having more account management teams to help support the salespeople. They're getting better at fulfillment. They have better processes, better workflow, and those things.”

“And a natural consequence of that is that we may not always need as many salespeople as we've had before when we're really taking non-selling activities off of sales teams.”

Susan approaches the shrinking of sales teams from a slightly different perspective.

She says, “Yes, I totally agree with Stephanie, but I also see the other side of that. Because we know [sales teams] also want to be larger. Some of the teams need to be larger.”

“I think that during COVID, people kind of reevaluated their priorities. And I think some salespeople wanted to be closer to family, and they moved....some people decided to retire earlier than they planned.”

“So, people are reevaluating, and they want to work for people who consider them humans, not just sellers. And I really see that, I heard somebody say the other day, ‘you know, we used to say, well, business is business.’”

“And really, today, business is personal!”

People want to work for people that buy into a vision and that they want to do a great job for.”

Stephanie says, “I would say they absolutely have to have a really strong sales enablement process to help their team sell smarter and sell faster. They have to have that in play. Because that helps expedite the sales process, right?”

“The other thing I would tell a leader, in this case, would be to make sure they have a sales calendar. That they know exactly what their sales initiatives are, and what they're focused on, because it keeps the focus in the right place, it keeps the attention in the right place...and I would be as intentional as possible about removing all non-selling activities off of salespeople that they possibly can.”

Susan offers, “I was going to say to make sure that you have clear and mutually agreed upon expectations. That the team that you have really understood and is all moving in the same direction.”

“Also, having a list of your to-dos and then making sure that you're prioritizing that list as a leader. But teaching and showing your salespeople how to do that too. I think everybody thinks that they do that, but I think a lot of people could do it better.”

“And then really time blocking. Kind of like the sales calendar you do for the year. This is what you're doing for your week or for your day and making sure that you're really maximizing your time.”